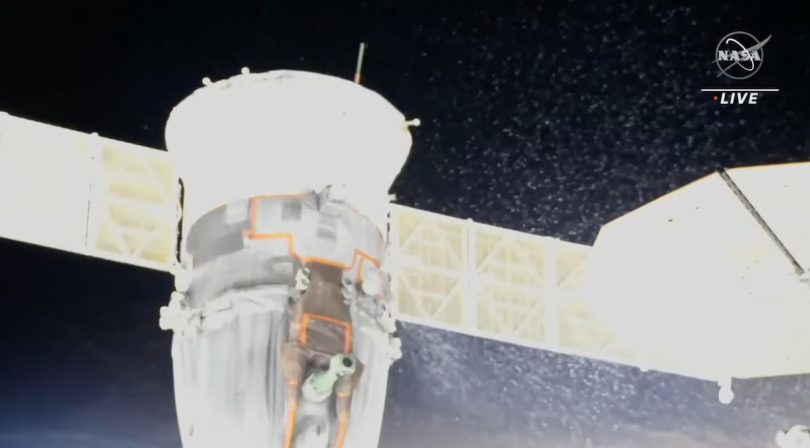 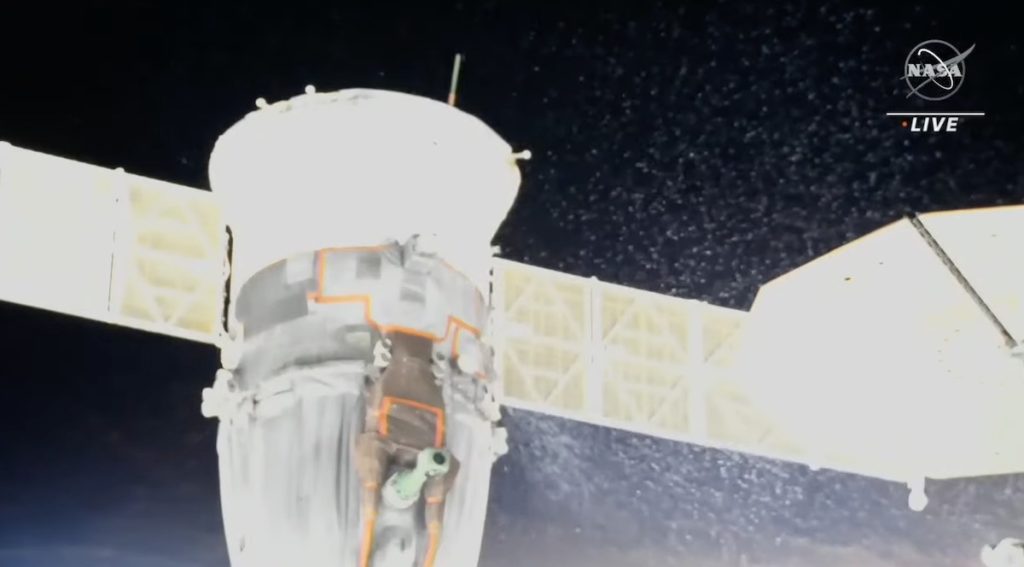 A Russian Soyuz crew ferry ship docked to the International Space Station spewed particles of an unknown substance, presumably coolant fluid, into space Wednesday night, forcing two Russian cosmonauts to call off a planned spacewalk as engineers on the ground scrambled to determine the source and the effects of the leak.

Mission controllers first observed the leak around 7:45 p.m. EST Wednesday (0045 GMT Thursday), according to Rob Navias, a NASA spokesperson providing commentary on NASA TV. The leak occurred as Russian cosmonauts Sergey Prokopyev and Dmitri Petelin prepared for a spacewalk to help relocate a radiator from outside of the Russian Rassvet module to the Nauka science module on the space station.

But before the cosmonauts could head outside, Russian ground controllers near Moscow noticed “significant leaking of an unknown substance from the aft portion of the Soyuz MS-22 spacecraft docked to the Rassvet module on the International Space Station,” NASA said in a brief statement Wednesday night.

Navias said Russian ground teams noticed a warning tone indicating a drop in pressure in an external cooling loop on the Soyuz spacecraft when the spray of snow-like particles were first observed streaming away from the capsule.

There are two manifolds in the Soyuz spacecraft’s single cooling loop, Navias said. It wasn’t immediately clear what impact the apparent coolant leak might have on the performance of the Soyuz spacecraft, which launched Sept. 21 from the Baikonur Cosmodrome in Kazakhstan with Prokopyev, Petelin, and NASA astronaut Frank Rubio.

“The spacewalk has been canceled, and ground teams in Moscow are evaluating the nature of the fluid and potential impacts to the integrity of the Soyuz spacecraft,” NASA said in a statement.

“The experts in Moscow are going to be taking a look at their systems and responding to the leak according to their procedures and policies,” said Emily Nelson, NASA’s lead flight director at the Johnson Space Center in Houston. “Once they have a good understanding of the final status of the Soyuz tonight, we will then jointly make a decision about where to go forward from here.”

Navias said there is no danger to the crew from the apparent coolant leak, but officials will need to sort out the condition of the Soyuz MS-22 spacecraft, which is the lifeboat and the ride home for three of the crew members on the International Space Station.

“The best plan of action tonight was to focus all of our attention, all of our Moscow team’s attention, to sort out what’s going on exactly with the Soyuz spacecraft, and we’ll regroup tomorrow,” Nelson said Wednesday night. 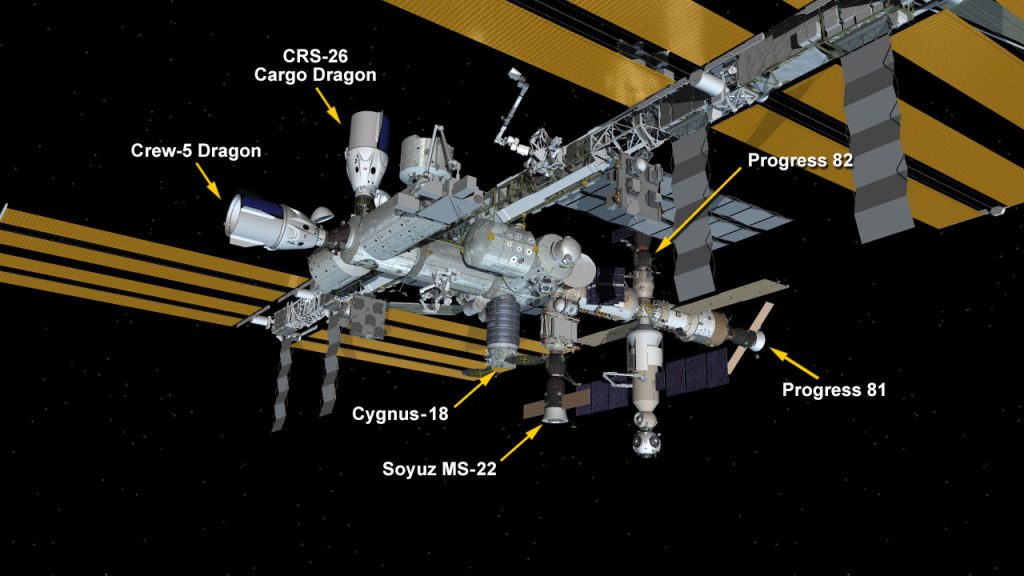 The configuration of the International Space Station as of Dec. 14, showing the location of the Soyuz MS-22 spacecraft docked with the Rassvet module on the Earth-facing side of the complex. Credit: NASA

Russian engineers were also assessing whether the leak might have been caused by an impact with space junk or a micrometeoroid, or whether it could have been triggered by a problem on the Soyuz spacecraft.

The Soyuz MS-22 spacecraft is scheduled to return to Earth with Prokopyev, Petelin, and Rubio on March 28. Until then, the spacecraft serves as the emergency lifeboat for the three-man crew that launched aboard it in September. If Russian officials determine the Soyuz MS-22 spaceship is unable to bring the crew home, a replacement Soyuz could be launched from Baikonur without anyone on-board to automatically dock with the station.

But it’s unclear when the next Soyuz in line, Soyuz MS-23, could be ready for launch. It is currently scheduled to take off March 16 with Russian cosmonauts Oleg Kononenko, Nikolai Chub, and NASA astronaut Loral O’Hara to begin a six-month expedition.

Russian ground controllers instructed cosmonauts on the Russian segment of the station to take zoomed-in photos of the instrumentation and propulsion module on the Soyuz MS-22 spacecraft, the apparent origin of the leak. 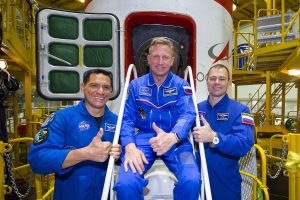 Working from a control panel inside the station, Kikina extended the European robotic arm to survey the Soyuz MS-22 spacecraft after the leak.

The next SpaceX Crew Dragon mission is scheduled for launch Feb. 19 from Kennedy Space Center in Florida with two NASA astronauts, an astronaut from the United Arab Emirates, and a Russian cosmonaut.