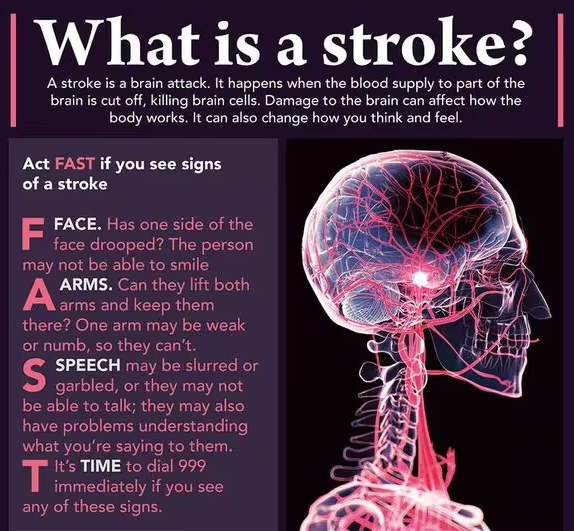 A stroke is one of the leading causes of death and disability in the UK. However, in some cases, patients report symptoms of a stroke one week before the stroke occurs.

Strokes, if not treated efficaciously, can either cause death or long term disability to those who experience them. However, as well as coming on suddenly, sometimes stroke victims may experience signs of an oncoming stroke the Cardiac Screen said: “The signs of a stroke often appear suddenly, but that doesn’t mean that you won’t have time to act.

“Some people will experience symptoms such as headache, numbness or tingling several days before they have a serious stroke.

week before. Cardiac Screen says these symptoms can affect almost half of all stroke patients.

“One study found that 43% of stroke patients experienced mini-stroke symptoms up to a week before they had a major stroke.”

“If you take note of these symptoms and seek help even if they go away, then your chances of a good recovery are much better.”

What is a mini stroke?

A mini stroke, also known as a transient ischaemic attack is a cardiovascular event caused by temporary disruption of the blood supply to the brain.

The main symptoms of a transient ischaemic attack, also known as a TIA for short, are the same as those of an actual stroke.

As to when to get medical advice, the NHS says: “In the early stages of a TIA, it’s not possible to tell whether you’re having a TIA or a full stroke.

“It’s important to call 999 immediately and ask for an ambulance if you or someone else has symptoms of a TIA or stroke.”

Furthermore, they added: “If a TIA is suspected, you should be offered aspirin to take straight away.

“This helps to prevent a stroke. Even if the symptoms disappear while you’re waiting for an ambulance to arrive, you still need to be assessed in hospital.

“You should be referred to see a specialist within 24 hours of the onset of your symptoms.

“A TIA is a warning sign that you may be at risk of having a full stroke in the near future, and an assessment can help doctors determine the best way to reduce the chances of that happening.”

What causes a TIA
In common with a full-blooded stroke, a TIA is normally caused by a blood clot that blocks the vessels supplying the brain with oxygen.

Some risk factors can increase your risk of a TIA such as smoking, high blood pressure, obesity, high cholesterol levels, and regularly drinking large quantities of alcohol.

Furthermore, having an irregular heartbeat can also increase your risk, as can diabetes.

A TIA is treated slightly differently to a stroke, however, there’s an important reason for this.