He’s also told how the start of his ‘rift’ with his brother, now the Prince of Wales, was ‘heartbreaking’

Prince Harry has shared the moment his brother ‘screamed and shouted’ at him and told how the start of his ‘rift’ with Prince William was ‘heartbreaking’. The Duke of Sussex has accused Kensington Palace of failing to offer the same protection for him and Meghan like other members of the royal family, mainly William and wife Catherine.

The Duke of Sussex was speaking in the latest episodes of his Netflix series alongside the Duchess of Sussex which dropped on the streaming platform on Thursday (December 15). Volume 2 of the couple’s series, entitled Harry & Meghan, features the final three of the six episodes and focuses on the couple’s decision to step back as senior members of the royal family.

In episode four of six, Harry claimed that royal households briefed against each other to trade stories to the press and avoid critical press about themselves. But the 34-year-old said he and his brother, now the Princes of Wales following the death of the Queen and his dad’s accession to the throne, made a pact that they would never allow their households to do this to each other.

In the documentary series, Harry appears saying: « William and I both saw what happened in our dad’s office and we made an agreement that we would never let that happen to our office… I would far rather get destroyed in the Press than play along with this game or this business of trading. And to see my brother’s office copy the very same thing that we promised the two of us would never ever do, that was heartbreaking. »

Prince Harry has previously spoken of the tense relationship he now shares with his brother, Prince William, since he and Meghan made the decision to step down as senior royals. In their tell-all 2021 interview with Oprah Winfrey, the Duke of Sussex said: “I love William to bits. He’s my brother. We’ve been through hell together.

« I mean, we have a shared experience. But we, you know, we’re on different paths. » He added of their relationship at the time: « The relationship is space at the moment. And, you know, time heals all things, hopefully. »

Also in the documentary, in episode five, Harry and Meghan spoke about being ‘blocked’ when they arranged to see the Queen. The duke shared how the couple were planning to fly back to the UK for a visit in early 2020 and the Queen told him she had no plans all week so they could go for tea and stay the night.

« Before we left I spoke to my grandmother as well and told her we were coming back on the 6th [of January, 2022] and I would love to drive up and come up to see you, » Harry explained. « She knew that we were finding things hard, I had spoken to her many times about it, she told me she had no plans for the week, she said why don’t you come up, you can have tea but why don’t you stay the night, you and Meghan. »

Meghan then said: « So, we’re flying back from Vancouver straight to Heathrow, and right as we’re getting on the plane, this urgent message comes through to H, saying ‘You are not allowed to go and see Her Majesty. Make sure that your principal is aware he cannot go and see her. She’s busy. She has plans all week.' »

Harry then told the camera: “ » was like ‘Well, that’s certainly the opposite to what she had told me.' » He added: « Once we were back in the UK, I rang her and said ‘We’re now told that you’re busy.’ And she said ‘Yes. I didn’t know that I was busy. I’ve now been told I’m busy all week. I’ve actually been told I’m busy all week.’ I was like ‘Wow’. »

Meghan said: « I remember looking at H and thinking ‘My gosh. This is when a family and a family business are in direct conflict because they’re blocking you from seeing the Queen, but what they’re really doing is blocking a grandson from seeing his grandmother. »

‘Terrifying to have my brother scream and shout’

Later, Meghan shared how she had to go back to Canada to be with their first-born, son Archie and that after that a meeting was arranged to discuss the pair stepping back from their role as senior royals. « Imagine a conversation, a round table discussion, about the future of your life, when the stakes are this high, and you as the mom and the wife and the target in many regards, aren’t invited to have a seat at the table, » Meghan said.

Harry claimed they planned it so that she wouldn’t be in the room before talking about the eventual meeting. « It was terrifying to have my brother scream and shout at me and my father say things that simply weren’t true, and my grandmother quietly sit there and sort of take it all in, » he revealed.

While he said the Queen’s ultimate responsibility is the institution, Harry claimed: « People around her are telling her ‘by the way that proposal or these two doing XYZ is going to be seen as an attack on the istutuion’, then she’s going to go on the advice she’s given. » 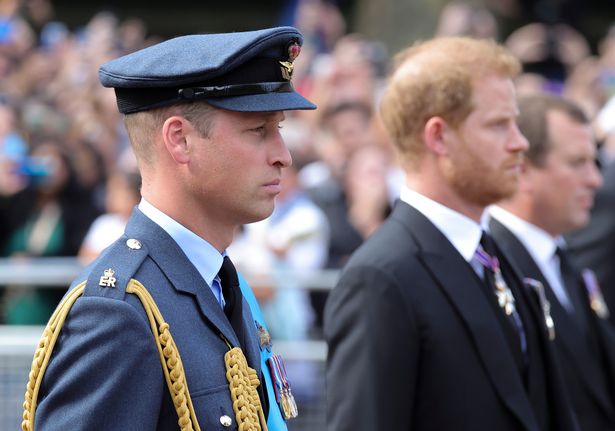 On the meeting, he said it finished without any solidified action plan. « I think from their perspective they had to believe that it was more about us, and maybe the issues we had as opposed to their partner, the media and themselves and that relationship that was causing so much pain for us, they saw what they wanted to see, » Harry said.

He added: « The saddest part of it was this wedge created between me and my brother so that he’s now on the institution’s side, and part of that I get, that’s his inheritance, so to some extent it’s already ingrained in him that part of his responsibility is the survivability and the continuation of this institution. »

As footage is shown of the boys playing as kids, Harry shared how there was a story in one of the papers saying that part of the reason they left was because William ‘bullied us out’. « Once I got in the car after the meeting I was told about a joint statement that had been put out in my name and my brother’s name squashing the story about him bullying us out of the family, » he claimed.

« I couldn’t believe it. No one had asked me permission to put my name to a statement like that, » he added. Harry said he then rang Meghan to tell her and she burst into tears. « Because within four hours they were happy to lie to protect my brother and yet for three years they were never willing to tell the truth to protect us, » he said.